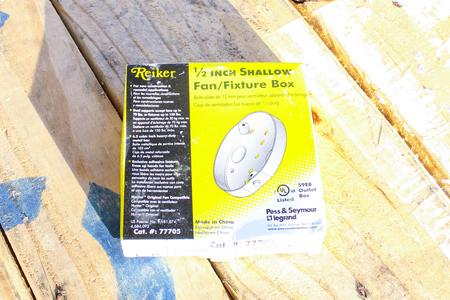 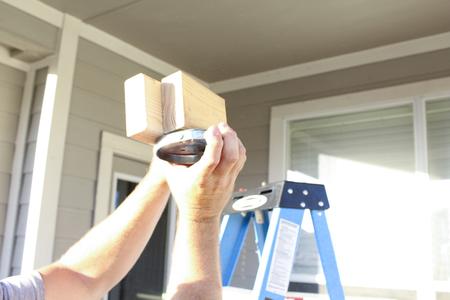 Side note: be sure that any fans you purchase for use outside are rated as outdoor fans. Indoor fan blades will warp very quickly in the humidity. Indoor fans installed outside need to be replaced at least once a year.

Home Decorators Collection makes this fan; it's the right color which is, of course, the most important, but it has long 21-inch blades (making it a 52-inch fan), and the airflow is over 6,000 cubic feet per minute(CFM). The airflow is the number you want to look at if you’re looking for something that offers comfort and bug deterrent. The higher the CFM number, the better it’s going to be able to move the air around. Of course, the fan also came with a light kit, since I was replacing the only source of light on the porch, and it's reasonably priced; we’re not about to spend $600 on a fancy fan.
​ 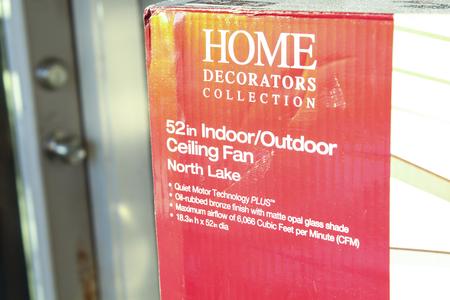 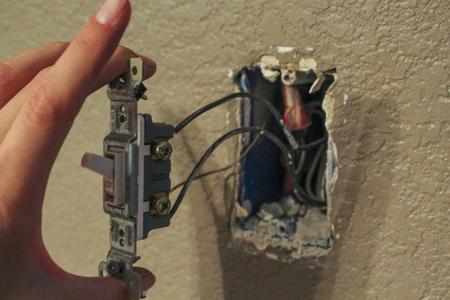 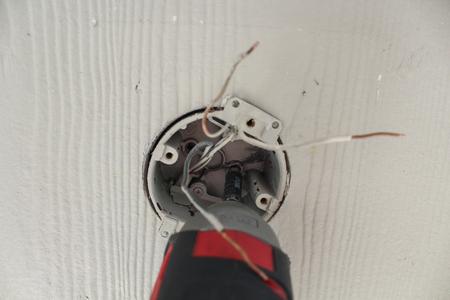 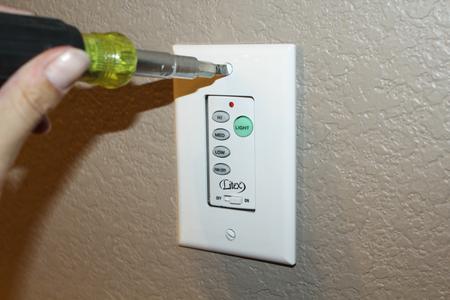 Not every receiver and remote are the same; ours have a set of dip switches that need to be exactly the same.

Side note: I don’t recommend leaving them on factory setting even if this is the first fan in the house with a remote if you have nearby neighbors. The remotes are searching for a particular set of dipswitches, if your neighbor is on the same frequency, your fixtures will talk to each other, meaning your fan will turn on and off at seemingly random times. We also happen to have several of these already installed, so it’s a trick to picking a different setting than one we already have.

Pull off the plastic ends to the wires or strip them with a wire stripper, making sure there’s about a half inch of bare wire and twist them together. You can do this with your bare hands or gloves since the power is off we’re not directly in harm's way.

So out comes the Sawzall. Perfect fit. Since the fan wasn’t attaching directly to a joist it was going next to a joist we had to get a little creative with attaching the box. We attached two small pieces of 2x4 together and to the 2x4 above the ceiling to create the stability and weight distribution we need from the fan box.

The light fixture was attached by a few different screws, two on the sides and one big on in the middle.

Replace an existing porch light with an outdoor ceiling fan

Texas summers can be brutal but watching the sunset from your back porch with a ceiling fan is a game changer. We had the average, builder grade light fixture so I went to Home Depot and picked up an outdoor ceiling fan.


Put the new switch back into the junction box and the plate back onto the switch. It’s time to test everything, turn the breaker back on and try all the buttons on the switch. Voila! You’ve just installed your very own porch ceiling fan!

There was just one problem; the fan box was bigger than the hole for the old junction box.
​ 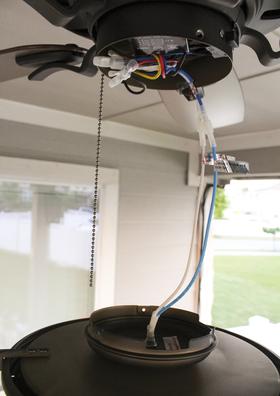 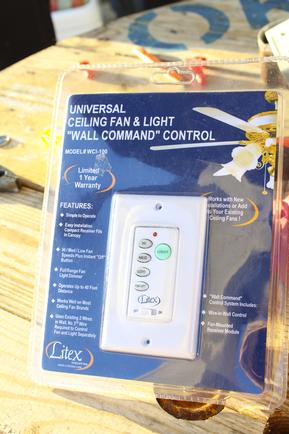 Now that the fan box is in, it’s time to start hanging the fan. There’s a small bracket in the fan box that goes up first, you may have to do some disassembly to the canopy when it comes out of the box. There are some slots on the side of the fan bracket that hold it to the fan box. The bracket has a C-shaped hook that the fan rod slips into, so we can assemble most of the fan (motor, down rod and canopy). But first, we need to cut the wires a bit. Most ceiling fans come with the ability to hang from a relatively long down rod, so there’s plenty of wire if that’s your intention. Our ceiling fan was just going on a short rod that came in the box, so we had more wire than we needed. We usually only leave about a foot of wire coming out of the top for a short down rod, but if you wanted to drop it down with a longer rod later, it wouldn’t be a terrible idea to leave some extra. Make sure you put the canopy over the downrod before installing the down rod.  Otherwise, you’ll have to take it back off to put the canopy on.  Be sure to tighten the set screw on the down rod to keep the fan stable. Loose set screws could lead to wobbly fans. Once everything is tight, and the wires pulled through the top, it’s time to hang the fan on the bracket. 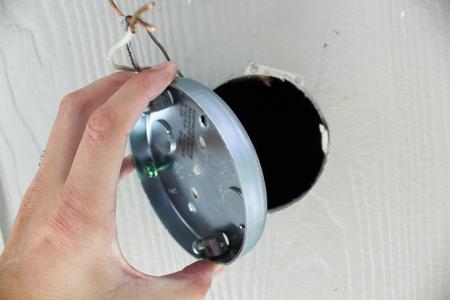 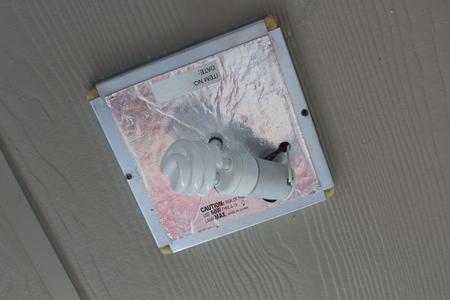 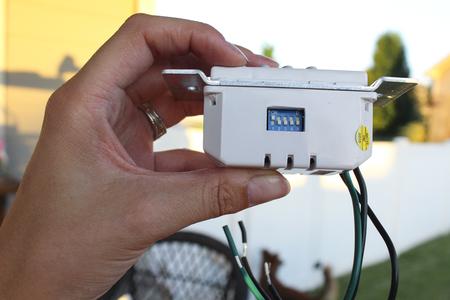 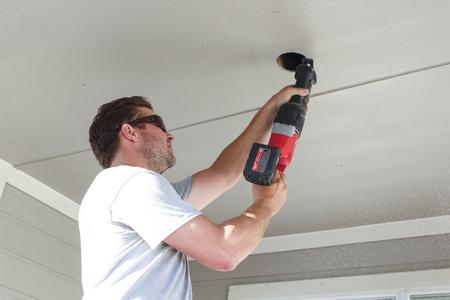 The fan is up; now we need to attach the light fixture. Wiring this part is easy, two wires that snap together. Tighten up any screws to keep the light kit in place, put the bulbs in and put on the light cover. And the fan is done!

The receiver fits nicely up in the canopy of the fan, hidden away where no one can see. Fit the canopy ring up against the ceiling and tighten. Attach the fan blade holders and then the blades. Our blades just snapped into place.

There are two options for ceiling fan brace boxes; the first is a remodel fan brace and box, meaning the brace and the junction box are one item. The remodel brace is used when the hole for the fixture is at least an inch from one of the joists. This brace stretches out between the two joists on either side of the hole and braces the weight of the ceiling fan or chandelier by distributing the weight. The other option, the one that we used, in this case, is called a pancake fan box, it’s a shallow box meant to attach directly to a joist to distribute weight. The hole for our light fixture was directly next to a stud which means we need to use the second fan box and a little ingenuity.
​

This particular fan box attaches to the joist from underneath, so we had to add the wood on top of it. Of course, we had to install it into the ceiling and attach it to the existing joist before we could install the new fan box. When doing this, be sure to leave some room for the wires to come out of the ceiling.​ 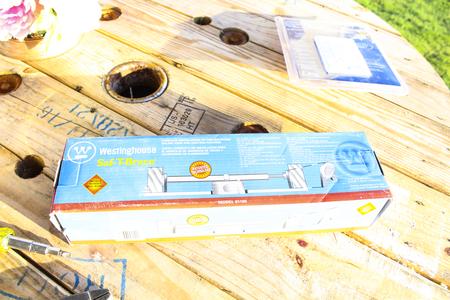 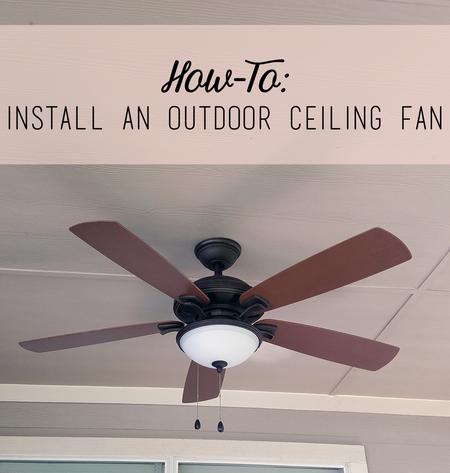 Just about ten more minutes and we’ll be able to enjoy our new fan. Remember the light switch that needs to be changed out? Unscrew the screws from the plate and take the plate off, there should be two more screws attaching the switch to the junction box behind it, remove those as well. Pull the switch out by the yoke (the metal part) and extend the wires so you can work on them.

Stuck? Ask us a question! 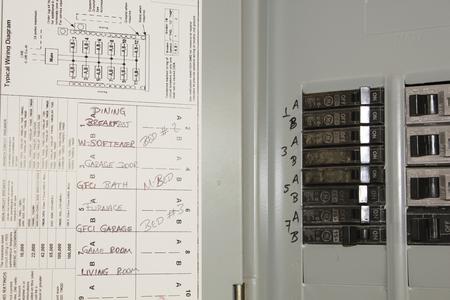 Since we just had a single light fixture before, we only have one switch for the fixture. I wasn’t about to climb on my table every time I wanted to change the fan speed, so this is the part where we plan ahead. We’ve got a fan remote kit that works on any fan that doesn’t already come with a remote kit. Instead of a handheld remote, which some opt for, we went with the in-wall control. I’ll show you how it replaces the switch a little later. There are two parts to the kit; the first is the controller and the second is a receiver, the part that tells the fan which button you pushed on the control. The receiver connects to both the home’s wiring and the fan’s wiring. The receiver has notes on each wire that direct you to which wire it’s supposed to connect.

Behind the light fixture was a bracket that also needed to come down so we could get to the junction box above it. Once the wires are free and clear, detach the wires connecting the old fixture from the home’s wiring.
​ 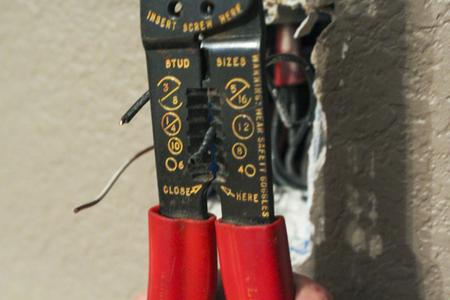 First thing first, we needed to turn the power off to the light so we could safely work on the wires.